This photograph was taken on my second last week in Paris. I still remember breaking the winder of my beloved Nikon fm2 when I was changing a film. I was devastated but it didn’t stop me from taking photographs.

Le Penseur is one of Rodin’s most memorable artwork, located in the garden just outside the main gallery. I used a roll of Tri x as usual, developed with Rodinal at 1:50.

I’m finding it a little harder to get motivated to take photos these days. Sydney isn’t Paris…

I must admit I really miss the crepes out of all the glorious food in Paris. Even the 2 euros crepes  from the streets tasted soooo good. Of course, I love all the desserts – the famous crème brûlée and moelleux au chocolat, but I really miss crepes the most.

I had to go on Google earth and go around the seine river so many times until I found out the exact location where this photograph was taken. It was at Quai de la Tournelle, quite close to Notre Dame.
I was surprised it took me so long. It felt so good when I finally see the snapshot on google earth matched this photograph. They look almost the same. It’s nice to see some leaves on those trees. They weren’t there last time I was there.

It’s hard for me to say that this is one of the best spot to see La Seine because there are just so many good spots. It was definitely one of my favourite place to see it at the time. I love how the trees are all aligned. I loved walking while watching the other side of Paris from a distance, being separated by all that water.

This was taken on a cloudy, cold day some time in late February with a Kodak Tri x rated at 400iso. This film brings out the best of this. It could’ve easily turned out really flat because of the lighting. The contrast levels between the other side of town compared to the road is just how I like it. I have been a fan of this film for many years. If you’ve been following my blog, I’m sure you know that by now.

I took this photograph on my way out of Place des Vosges. I wandered around there for about half an hour before I decided to leave. I like how those 4 men seem to add a bit of story to this photograph.
As you can see in the photograph, this place does look like a city within a city. You can read more about Place des Vosges in my previous entry. It’s quite interesting.

This was shot on a roll of Tri X 400 and later developed with Rodinal as usual. I did have a few rolls of Fomapan 400 that I ended up using while I was in Paris. I will discuss that later in my next posts.
I love my grainy Tri X and I love how they say it in French (Tree- Eeks). Awesome.

After walking down Rue de Rivoli, doing window shopping, I walked past Hotel de Ville and not long after that I found myself in a little square with a beautiful park, called Place des Vosges. It is the oldest square in Paris, built in 1605 (thanks,Wikipedia!). In the middle of all the busy streets, there it was.. a hidden quiet place.

Ma Bourgogne is a café with a really great reputation. Jean Paul Satre was a fan. It doesn’t look as fancy as Le Dome, but it’s quite modest and quite French.

There were cafes, little galleries and shops all around, but it was so easy to ignore all that and just stare at this beautiful old square. It felt as if I went back to 1605. I doubt much of it has changed since then.
I was so excited when I found this place. No one has ever told me about it. I was really living my dreams when I was in Paris – exploring, discovering and imagining. It’s one of the best things I have ever done. No, I can’t put it in my resume and it won’t get me on a cover of a magazine, but I can still talk about it with a big smile on my face. I enjoyed every minute of being lost and finding myself in places like this.

I found a collection of old family portraits and baby photos while I was there in Paris. I’m just starting to explore them one by one.
The other day while I was working with these images, I started to wonder ‘what happens after I’ve made prints out of all of these found negatives? I’ll have nothing else as exciting to work on.” It’s like eating the best Belgian dark chocolate, knowing you’ll probably cry once it’s all in your tummy and you can’t buy some more unless if you buy a plane ticket and go back to Brussels.
I’m not mentally prepared for the end of this…

Anyway, back to this image… you can probably guess it was taken while the family wasn’t ready for a portrait. If you look closely, you’ll notice that there’s another little kid hiding behind the baby. The mother was trying to get him/her in the picture.
The composition is not all that perfect. I’m just making a guess that it’s the father, taking the picture… not a paid photographer.
Overall, it’s a simple, honest portrait. It’s probably not the one that’s hanging on the family’s wall. This was probably taken a few minutes before they got the final photo that they were happy with, and I don’t know how that final photo looks like but I like looking at this portrait. It’s more of a documentary rather than a portrait.

A café in St Germain- des-Prés.
I showed up on a sunny Saturday afternoon and couldn’t get a seat. It’s another famous café where people like Pablo Picasso and Ernest Hemingway liked to go for une verre de vin blanc ou cognac.

I love the expression on the face of the woman in black, standing by the door. She was staring back at me when I took this photograph. See if you can spot her.

The highlights were a little overblown but it doesn’t seem to bother me. I might do another print and fix that up. There’s nothing that a simple dodging and burning can’t fix! I know it’s not perfect but for now, I’m quite happy with it.
Enjoy your weekend everyone. Take your Mum out for a coffee.
If you’re in Paris, here is where you can find more info on the café: http://www.lesdeuxmagots.fr/en/

I get excited every time I see these faces. I wish this man well if he’s still alive. The negative was in good condition. There’s barely any scratches on it. It was overexposed though. I could have fixed it up in the darkroom if I wanted to, but I want to stay true to the real photographer’s work.

From the car in the photograph, I am guessing this was taken sometime in a sunny day in 1920s in Paris. It was the best time to visit Paris. Imagine having lunch at Le Dome with Pablo Picasso…

I think this photograph was taken just a few minutes after I took the photo posted previously. It was still around St Germain. It was a beautiful building but unfortunately I couldn’t go in because it was a private property. Acces Interdit.
St Germain is definitely one of my favourite parts of Paris – countless of galleries, vintage bookshops and interesting cafes all in one little area…
I would definitely recommend it. Don’t forget to get lost in the alleyways. It’s a lot of fun. When you get lost, you can always practice your French.

This picture was taken on my last day in Paris. I strolled along the streets of St Germain and cried a bit as I said goodbye to Paris.
It was a gloomy day but it was beautiful.
It’s been awhile since I gave street photography a shot. I just wanted to capture the life of modern Parisians. Not much has changed. They love their art and they still love hanging around at cafes, drinking wine with breakfast, lunch and dinner.
I miss Paris. 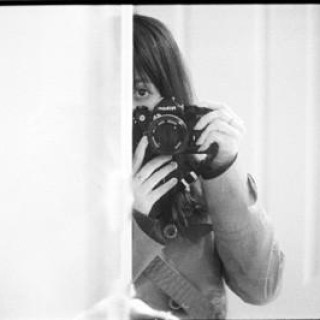 Jessica Angelina is a photographer based in Sydney. All images posted in this blog were created, developed and post-processed in her very own darkroom.